From Downtown Disney to Disney Springs

Part of what makes Walt Disney World so special is that it really is a “world.” It goes so far beyond the theme parks.  From the resorts to the transportation and recreation, there is enough to see and do on 12 vacations, let alone just one.  An important part of this world is Disney’s shopping, dining, and entertainment district, now known as Disney Springs.

Disney Springs has undergone quite the transformation over the past five years.  Previously Downtown Disney (opened 1989), and the Disney Village Marketplace before that, Disney Springs has become THE place to be if you’re looking for a fun night outside the theme parks.

Downtown Disney used to be broken into three main parts.  The Marketplace contained most of the Disney-themed stores and quick service restaurants.  The West Side contained most of the entertainment options that locals would be interested in, including a movie theater, Cirque du Soleil, Planet Hollywood, and several other dining and shopping options.  Lastly, Pleasure Island was the hot spot for nightclubs and another favorite of the locals and vacationers in their 20s.  While the Downtown Disney of old was still a go-to spot for many Disney vacationers, there was no cohesive story to tie the parts together, it wasn’t drawing the local clientele that was Disney-friendly, and Pleasure Island caused Disney executives many headaches over the years with the unruly behavior of guests.  Cue 2013 and a major announcement…

The concept of Disney Springs was announced in 2013 and though the majority of it opened in 2016, it is still evolving and adding major stores and restaurants to its collection.  Disney Springs is broken into four main parts, but the theme of “the Springs” ties all the areas together.  Kathy Magnum, executive producer at Walt Disney Imagineering said, “The heart of Disney Springs, of this whole development, is an area that we’re calling The Springs. And The Springs is a bubbling water fountain. It’s sort of a natural space where we’re really taking advantage of the water in general.”

The four areas are broken down into:

Disney Springs has become a must-do for my family on our Disney vacations – much more so than it was before the renovation.  Even though it can be quite crowded, there is a calmness and openness to the area that was certainly not there previously thanks to its new design.  With the connection in theme, there was also a concerted effort to connect one end of Disney Springs to the other, making it easier than ever to maneuver between the West Side and the Marketplace.  I love having the ability to check out Splitsville and then hop on over to Earl of Sandwich in just about 20 minutes, when you would have essentially had to take a bus back and forth previously.

Like other areas of Walt Disney World, Disney Springs also comes to life in a whole new way at night.  A myriad of nighttime entertainment options can keep the kids and dad occupied while you head off and explore!  I never knew Downtown Disney even needed a remodel, but then Disney Springs came along.  Now, I don’t want to envision a Walt Disney World without it, and neither do a lot of local families who have responded extremely well to Disney’s efforts to include everything they could need to have a night out all in one place. When Disney wins, we all win! 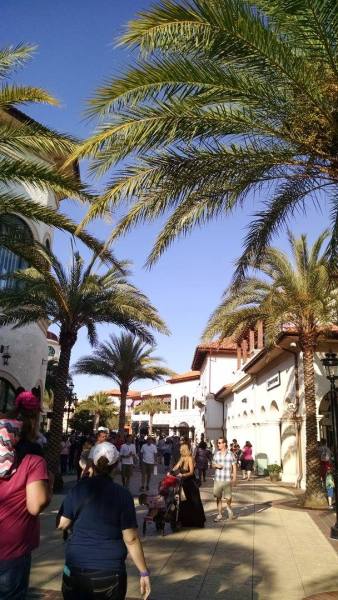